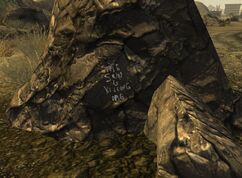 Hollowed-out rocks are rocks that have been hollowed out and have items stored in them and are found across the Mojave Wasteland.

In total, in the Zion Canyon, you can find 15 hollowed-out rocks:

These rocks are much easier to spot with Rex's Search and Mark perk, which highlights any container with usable items inside (i.e. Nuka-Cola, ammunition, etc.). Without Rex, one can still identify them by the symbols marked on them. Some rocks will have nothing written on them, but almost all will be a slightly different color than the surrounding rocks.

Burial mounds
Add an image to this gallery
Retrieved from "https://fallout.fandom.com/wiki/Hollowed-out_rock_(Fallout:_New_Vegas)?oldid=3306279"
Community content is available under CC-BY-SA unless otherwise noted.