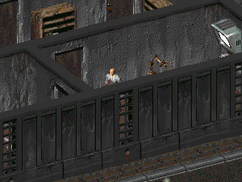 “What do I do here? You're in a hospital. I'm wearing a doctor's coat. I'm covered with blood. There are sharp, pointy things lying all around. Either I'm a successful killer or a fair doctor. Take your pick.”— Doc Holliday

Doc Holliday is a resident of Broken Hills in 2241.

Holliday is a wizened old man wearing a doctor's coat.[1] Born in Broken Hills in 2170, he met his wife while wandering the wastes. After she died he studied medicine in San Francisco, under the tutelage of Dr. Fung[2]. Now, aged 70, he is Broken Hills' doctor.

Doc Holliday appears only in Fallout 2.

John Henry "Doc" Holliday was a dentist, gambler, and gunfighter of the American Old West.

Retrieved from "https://fallout.fandom.com/wiki/Holliday?oldid=3343330"
Community content is available under CC-BY-SA unless otherwise noted.