Not of This World

“Well, there ain't no easy way out. Trust me, I've looked. Can't even find anything to pry open, see what's blocking the doorway. I'm thinkin' they did us a favor, putting us together in here like this. And I say we use it to our advantage.”— Somah

The holding cells are a location on board Mothership Zeta.

The holding cells are the starting point in Mothership Zeta. There are many holding cells, with only a few people occupying them. One has the Lone Wanderer and Somah, one has an insane Rivet City security guard (not able to talk, but able to kill), one has a dead Enclave officer, and another has a small girl named Sally, who is extremely knowledgeable about the ship.

This is the place where the Lone Wanderer and Somah are being held captive by the aliens. It has only one entrance and one exit. The player character's holding cell opens up into a hallway with force field doors to five more cells, two of which contain a living, but insane Rivet City security guard and a dead Enclave officer.

To the left of the starting holding cell, the hallway dead-ends into a room containing 3 of the 25 alien captive recorded logs in seperate glowing circular control panels. At the opposite end of the hallway is a healing archway that restores almost no HP, but can be modified to restore much more health at the risk of burning it out after a few uses.

Just past the archway is another room containing three more alien captive logs and a locked door. Another holding cell hallway is to the left of this room where Sally can be found in one of them. At the end of this hallway is the coolant control panel and three core coolant switches which must be activated to release Sally from her cell.

After Sally opens the locked door, there is another hallway with a room to the left where the player character can retrieve any equipment they were carrying before the abduction as well as a few other items. The door at the end of this hallway leads to the Steamworks. 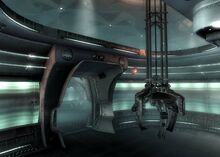 Add an image to this gallery
Retrieved from "https://fallout.fandom.com/wiki/Holding_cells?oldid=2860748"
Community content is available under CC-BY-SA unless otherwise noted.