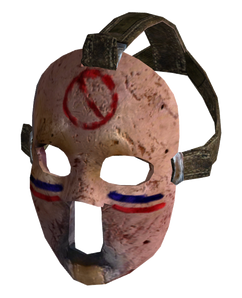 Hockey masks are pieces of headwear in Fallout 3. Covering the face, they are off-white with red and blue stripes on it and have a worn appearance.

The benefits to the wearer of the hockey mask is that their Unarmed skill is raised by 5 points when equipped.