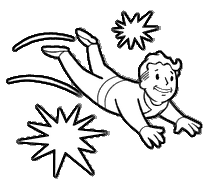 Your extensive familiarity with Explosives allows you to ignore a portion of their damage. Your Damage Threshold is increased by 25 against any and all Explosives—even your own. This makes Hit the Deck one of the best perks in the game for a character who makes heavy use of Explosives, especially with all 3 ranks of Demolition Expert and the Splash Damage perk.

You react very quickly to the word "incoming!" Halves the damage from area attacks and splash damage.

You react very quickly to the word "incoming". When hit by damage from explosions or sprays, you are considered to be an additional 2 hexes away from the origin for purposes of determining damage.

Retrieved from "https://fallout.fandom.com/wiki/Hit_the_Deck?oldid=3313585"
Community content is available under CC-BY-SA unless otherwise noted.
... more about "Hit the Deck"
RDF feed
Has platform
PC +  and Xbox 360 +