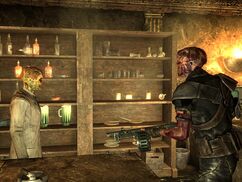 Ahzrukhal, a moment before being shot

“He is absolutely loyal to whomever holds his contract. Unfailing, unflinching, until the day that employment ends.”— Ahzrukhal, on Charon

Hired Help is an unmarked quest in Fallout 3.

If the Lone Wanderer speaks to Ahzrukhal in The Ninth Circle in the ghoul city of Underworld, he will tell them that he holds the employment contract of a ghoul named Charon (also located in The Ninth Circle in the corner). Charon is bound to work for whomever holds his contract. Ahzrukhal also tells the player character that he dislikes having to compete with the other beverage outlet in Underworld, Carol's Place. He proposes that if they were to murder Greta, who works there, he would be willing to give them the contract to Charon.

At this point one has two choices:

The simplest method to complete this challenge is to just kill Greta by any preferred means and return to Underworld once the residents have ceased to be hostile. However the task is accomplished, the Lone Wanderer should then return to Ahzrukhal to complete the quest.

Charon can also be acquired from Ahzrukhal by paying him either 2,000 caps or 1,000 caps if one has a Barter skill of 50 or higher. This way cannot be taken after accepting the task of killing Greta.

Whether one kills Greta or purchases the contract, Ahzrukhal will stick to his word and give them Charon's employment contract. After telling Charon that the player character now has his contract, he will walk over to Ahzrukhal, who will think he's coming to say goodbye. Instead, Charon pulls out his shotgun and blows Ahzrukhal's head off, then shoots his dead body one more time.

Looting Ahzrukhal yields a cooler key to a cooler full of caps and other loot. One may also steal anything in the room with no loss of Karma and no angry citizens. However, if one tries to pick the lock on the safe or hack the terminal they will become hostile.