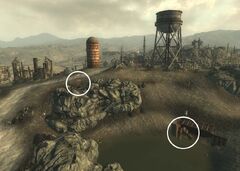 The hilltop farm ruins is an unmarked location in the Capital Wasteland in 2277.[1]

The house contains a terminal which chronicles the life of a group of wastelanders who lived there shortly after the Great War. The authors of the various terminal entries are Doc Johanson, Edgar, Jim, Rochelle, Tyrone and Tyler. In addition, four more residents called Miguel, Miles, Jacky and Vu are mentioned in the notes. A playground can be found outside.

The group had emerged from underground and started a small farming colony on the hill sometime after the war. They managed to construct an irrigation system for their crops and raised some livestock (a few brahmin can be found roaming nearby). Leadership rotated between the inhabitants once a month. The last entry speaks of the scout, Miguel, spotting travelers in the valley below, and the residents' intent to stay hidden. Skeletal remains found near the terminal indicate that at least one individual perished at this location.

The farm is located south of relay tower KX-B8-11, southeast of the grisly diner, northeast of Temple of the Union and north of the AntAgonizer's lair and Canterbury Commons. The ruins consist of a water tower, a silo, an outhouse, a makeshift windmill, two irradiated farm plots, and a destroyed farmhouse.

The corpse of a raider can sometimes be found down in the irradiated lake, next to the barrels of toxic waste. The body contains random loot. Wandering the area around the farm will generate several random encounters, such as a party of ghouls, traveling merchants, or a Brotherhood Outcasts sweeper team.

The hilltop farm ruins appear only in Fallout 3.

Guns and Bullets near the farmhouse

Dean's Electronics
Add a photo to this gallery

Retrieved from "https://fallout.fandom.com/wiki/Hilltop_farm_ruins?oldid=3499313"
Community content is available under CC-BY-SA unless otherwise noted.