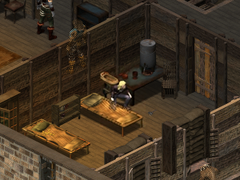 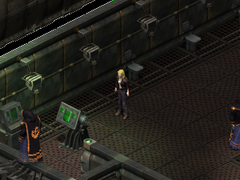 “The power generator room has been rigged with explosives. The Beastlords have threatened to detonate the explosives, destroying both the generator and our townsfolk if they suspect trouble. If they do this... I'll be out of office and the Brotherhood can look elsewhere for an alliance.”

Hillary Eastwood is the mayor of Quincy in 2197.

Hillary is loved by all of the inhabitants of Quincy. Around 2197, Quincy was attacked by a band of Beastlords, and she was taken hostage.

Hillary Eastwood is an old woman in her sixties. She has a strong personality and is quite cultured. She knows how to behave in high society and is generally accustomed to giving orders.

Hillary is about to marry Felix Stiles, an old war hero.[1]

She was rescued by the Brotherhood of Steel along with her daughter, Evita. Later, she could be found communicating with the Elders in Bunker Gamma.