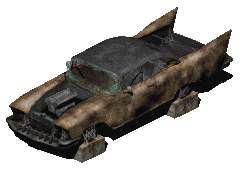 “Nothing can stop a Highwayman.”— Highwayman's slogan[1][2]

The Chryslus Highwayman is a full-size car manufactured by the Chryslus Motors Corporation of the United States. It was utilized by the Chosen One circa 2241.

Combining a stylish design with a tough and resilient frame, the Chryslus Highwayman is an excellent vehicle for any survivor of a nuclear war.[1] The car shares technology with the Chryslus Corvega: it has a fully analog system with no electronics, over 800 horsepower, and reaches 60 mph (97 km/h) in under a second.[3] It has a spacious trunk and an interior capable of accommodating as much as seven people, including a super mutant, robobrain, and a deathclaw.[2][4]

Like other cars in the resource-starved United States, the Highwayman uses replaceable fuel cells (batteries, for short), to provide its electric engine with power. The flow of power is regulated by the fuel cell controller, which is also the one part that tends to break down the most, usually burning out due to rapid acceleration.[5][6] A fuel cell regulator was an optional upgrade that more resource-conscious drivers installed, to improve the mileage.[7] Others did not care, as energy was considered cheap if you could afford such a car.[8]

The Highwayman is the only working vehicle usable by the Chosen One in Fallout 2. Found in the Den, it is necessary to find a fuel cell controller for the local mechanic to be able to buy it for $2000. It is an excellent method of transportation, greatly improving travel speed and providing permanent storage for the player's gear.[2]

The Highwayman is the only working vehicle usable by the Chosen One in Fallout 2. It can take the entire Chosen One's party, however large it is. The car can be found in the Den in the possession of Smitty. He can sell it to the Chosen One for $2000 if they can find a replacement part to fix it.

The car's battery can be charged with either microfusion or small energy cells. A full pack of SEC (40) charges it up 20%, a full pack of MFC (50) charges it up 50%. To refuel the car, hover the "interaction" cursor over the Highwayman, use the "bag" icon from the drop-down menu, and choose the respective energy cells. The Highwayman also has a trunk where items can be stored, with a sizeable 22 cubic feet capacity.

It can be upgraded throughout the game with several items:

“The car was originally going to be powered by fusion or fission or something nifty and nuclear (something that would allow us not to have to worry about running out of gas) and those big tanks in the back were representative of this big bulky power-source that was bolted on to the back of a '57 Chevy.

We had thought, at one starry-eyed point, that the car would be something that you could upgrade with more speed, armor, weapons, etc. and that it could be a more important part of the game—well, the engine and programmer tasking weren't up to the idea of having a moving vehicle (madness, I know ;) in the game so all of that went out the window. The power source was replaced by a much more mundane 22 cubic feet of cargo-space (more than any non-wagon vehicle in its class!).

So basically, the Highwayman's powerplant was downsized in order to meet with People's State of California emissions standards. It's often the case that a prototype car isn't exactly the same when it goes into production. ;)”— Matt Norton, Fallout Bible 8

The trunk, can be separated due to a bug

A car similar to Highwayman in Fallout 4

Retrieved from "https://fallout.fandom.com/wiki/Highwayman?oldid=3276469"
Community content is available under CC-BY-SA unless otherwise noted.