Highway to the Danger Zone 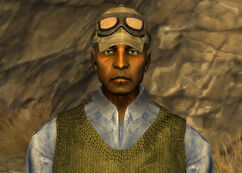 Highway to the Danger Zone is an unmarked quest in Fallout: New Vegas.[1]

When making one's from New Vegas to Nellis Air Force Base, the Courier will be halted by George. He warns them about the dangers ahead. For a wager, he is willing to provide them with instructions on how to safely reach the base. They can ignore him, just move forward or accept the challenge. If the Courier accepts it, he will give them a useful note.

The Nellis artillery timing details give a good way to get across: "The key to avoiding the artillery is to move from building-to-building up the northwest side of town toward the front gate. Stick to the high cover in the northeast corner of the two buildings, then make a bee-line for the gate. The Boomers won't shoot at their own people, so stick to the fence until you make it to the gate. Also, I know there is an old train tunnel that enters the area from the south, but no one has ever come back out of there to say it is safe."

"Highway To The Danger Zone" is a line from the chorus of a rock song called "Danger Zone" which is featured on the soundtrack to the 1986 American motion picture Top Gun. It was composed by Giorgio Moroder and Tom Whitlock, and performed by Kenny Loggins.

Retrieved from "https://fallout.fandom.com/wiki/Highway_to_the_Danger_Zone?oldid=3367958"
Community content is available under CC-BY-SA unless otherwise noted.