The highway is used by NCR soldiers and civilians to traverse back and forth to New Vegas.[1][Non-canon 2][2] When the NCRCF prison break occurred, I-15 near Quarry Junction was shutdown, causing traffic to divert down Highway 95 to the benefit of businesses along the route.[3]

Highway 95 enters the Mojave Wasteland from the northwest, beginning at a radioactive roadblock west of Brooks tumbleweed ranch and north of the Followers safehouse. The highway continues south, intersecting with Nevada 157 and subsequently passing through Freeside.

The roadway rises into an elevated freeway over New Vegas, returning to ground level by the Grub n' Gulp rest stop. The highway meets Highway 93 at the 188 Trading Post. It then passes HELIOS One and Novac, weaving around Clark Field.[Non-canon 3] The roadway passes through Camp Searchlight and exits the Mojave Wasteland at Searchlight Airport, in a collapsed tunnel underneath the remains of the runway tarmac. 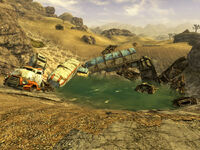 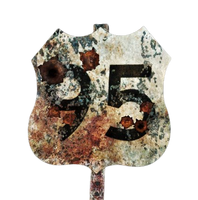 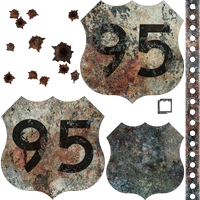