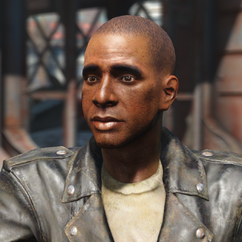 “We're going to make Charlestown a safer place, one asshole at a time.”

High Rise grew up with a troubled past, though it is never said why or what he did. He at some point joined the Railroad and is trying to work off the "misspent youth," and providing a safehouse at Ticonderoga for synths and other Railroad agents. High Rise is held in high regard by other Railroad agents, such as Deacon.[1] He dies during Operation Ticonderoga, after Institute coursers raid the safehouse.

High Rise appears only in Fallout 4.

Retrieved from "https://fallout.fandom.com/wiki/High_Rise?oldid=3289394"
Community content is available under CC-BY-SA unless otherwise noted.