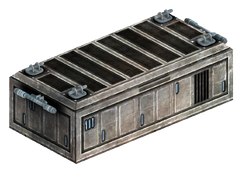 A high-tech gun case is a container found in the Fallout: New Vegas add-on Lonesome Road.

As the name suggests, it's a gun case that holds non-conventional and high tech weapons and modifications, such as mini nukes, Gatling lasers, and Tesla cannons.

High-tech gun case near the dock

Near the highway pillar

Two near an overturned truck

Courier's Mile
Add an image to this gallery
Retrieved from "https://fallout.fandom.com/wiki/High-tech_gun_case?oldid=3189809"
Community content is available under CC-BY-SA unless otherwise noted.