“It would also prevent it from going to Higgs Village and taking up residence there. With my teddy bears.”— Doctor Dala, arguing to allow the Courier to reside in The Think Tank

Higgs Village is a warehouse with six houses inside, each is designated with a number corresponding to a Big MT executive in the Think Tank.

Upon entering, there is a Securitron Mk I on the left with scrap metal and scrap electronics found around it. Upstairs is another Securitron with additional scrap. The Recipes - Repair skill book can be found by turning right just before entering the room furthest to the left and then looking at the lower shelf on the computer equipment. In the left room, on top of a computer terminal, is the Audio Sample - Giant Tarantula. On top of the house are two syringes of Med-X and one stimpak; the roof can be reached by jumping from the catwalk surrounding the village onto the roof. The house belonged to Dr. 0, as evidenced by the house number and a large number of broken robots strewn about. The same portrait of Mr. House seen at the House Resort is in the kitchen with knives stabbed through Mr. House's head, upper torso and groin.

To the left side of the building is a dead shrub with a Nuka-Cola Victory hidden under it. Directly behind the house against the white picket fence is a metal box with assorted items. Inside appears to be a party house with a bar to the right side of the entrance. Upstairs in the bathroom is a first aid box and two packs of Mentats on the shelf to the left. The middle room contains the Sink Project: Book Chute holodisk on a desk and Dr. Klein's glove on the shelf to the right of the door. Upon entering the bedroom is a wardrobe on the right with Dr. Klein's scrubs on it, as well as a picture that appears to be Tranquility Lane. In the bedroom, there is another pack of Mentats and a bottle of wine. The prescence of the glove and the scrubs indicates that the house was owned by Dr. Klein. Strewn about the place are many wine bottles as well.

Computer monitors and equipment litter the house. Recipes - Science skill book is located upstairs on the right upon entering the bedroom, along with packs of Mentats. Next to the desk, just outside of the bedroom, are two more packs of Mentats. There is an ice cold Nuka-Cola in the kitchen on the floor next to a bucket just to the right of the door. Behind the house are a wooden crate next to the picnic table and metal crates in the corner to the left with random loot inside. On the picnic table, there is another skeleton, and two bottles of beer. On the roof is a skeleton sitting on a chair with two beers, a "Big MT" metal crate and an (Average) locked footlocker (accessible by jumping roof to roof from the entrance). The house is presumed to have been owned by Mobius, since he has a Mentat addiction, and there is a large amount inside. Another hint that the house was owned by Mobius is that the left monitor of the two located to the left upon entering the house is dirty and broken, while the right one is fresh and new, not unlike Mobius' own eye monitors.

In the backyard is a rocket playset with a Nuka-Cola Quartz inside, as well as a dog house to the right of it for a dog named Gabe. With the Wild Wasteland trait, there is a tiny deathclaw named Stripe here. To the right, behind the house is a skeleton with two packs of Mentats lying next to it. On the left side, several broc flowers can be found.

Inside there is a multitude of empty birdcages. Upstairs in the bedroom on the floor is a knife stuck into a piece of paper with "Dad" written on it. On the perch in the green cage on the desk is a key for Borous' basement. Recipes - Medicine skill book can also be found on the desk. Downstairs towards the kitchen is the basement door with a lock on it (Very Hard). In front of the basement door, lying on the floor, is a pack of Mentats.

Upon entering after picking the lock (or using the key) and heading down is a gruesome sight. It appears that Dr. Borous liked to dissect animals and stab things into the faces and bodies of teddy bears. Inside one of the locked cages is a teddy bear with butter knives stuck into it. On the shelf in the back is a Ripper.

Upstairs, teddy bears sit in for spectators in the sexually charged, fashion-centric house, complete with broken mirrors, mannequins and cameras. The hallway is transformed into a runway stage with teddy bears as the audience. The bedroom features a similar theme, with more standing mirrors, a canopy bed with three floor-to-ceiling poles and a variety of costumes.

In the hall, on top of the radio, there is the Speech skill book holotape. In the bedroom, there are lots of pre-War clothes including sexy sleepwear. Downstairs in the kitchen are seven bottles of wine.

Behind the house are stairs to a catwalk. On the catwalk, there are multiple containers to search through. There is also a duffle bag on the roof wedged against the tree containing a number of chems and alcohol. Due to her obsession with teddy bears and human anatomy, this house is likely to have belonged to Dr. Dala.

The kitchen has eight coffee mugs and plates precisely lined up in what appears to be the work of obsessive compulsion. Upstairs in the office, there is the Sink Project: Jukebox holodisk on top of some paperwork on the desk, which is needed for the All My Friends Have Off Switches quest. In the locked suitcase (Hard) under the bed are some stacks of pre-War money and an Audio Sample - Opera Singer holodisk on the night stand.

Almost unique in all of the Mojave, there is what appears to be the sound of a pendulum clock ticking, suggesting the house might actually have a working clock, the other being inside the Goodsprings General Store.

Outside, on the right side of the house, there is xander root growing in a planter. There is also a wooden crate with a skeleton behind the house and a pack of Mentats. The house belongs to Dr. 8, as it was mentioned by him, and by Muggy in the ending. It is also suggested by the eight paintings and eight clocks on the walls. Furthermore, there are eight coffee mugs, along with eight dinner plates, in the kitchen.

The fountain is the center of Higgs Village. Initially, the fountain is inactive. It can be activated by starting the weather test inside X-17 meteorological station. There are several bottle caps in the fountain, along with a super stimpak.

The name is derived from Peter Higgs. Peter Higgs is the theoretical physicist that originally proposed the existence of a field that would utilize weak symmetry in the fundamental forces to allow massive objects. As a side effect of this "Higgs field," a particle many are familiar with, the Higgs-Boson, was theorized. As of March 14, 2013, CERN essentially confirmed the existence of the Higgs-Boson. 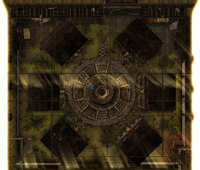 The village is located inside this hangar

Dr. Klein's scrubs, on the wardrobe 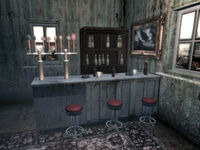 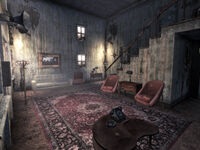 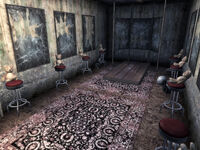 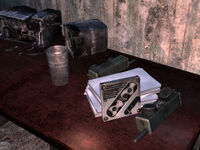