Play sound
Second_Chance.ogg
“I saw some Legion assholes carrying crates to a cave north of here. May have been NCR shit, I don't fucking know.”— Boxcars

The hidden supply cave is located to the northeast of Nipton in the Mojave Wasteland in 2281.

The entrance to the cave is secured with an Average locked door. This small cave holds boxes of varied sizes containing random loot, including a radiation suit. During the quest Wheel of Fortune, the radiation suit package can be found in a footlocker.

Outside the cave (when facing the entrance), to the right side is a small graffiti depicting a rocket with a prohibitive symbol over it. It marks the location of a hollowed-out rock. Over the ridge to the left, slightly east by southeast of the cave entrance, is a Vipers camp.

The hidden supply cave appears only in Fallout: New Vegas. 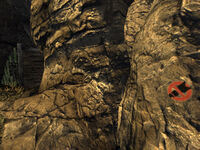 The rocket marks the hollowed-out rock