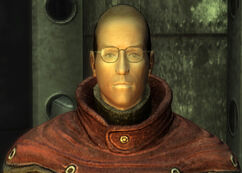 “Yeah, some Pre-War jackass with too much time on his hands apparently decided to inflict his misery on those around him.”— Ibsen

The Brotherhood of Steel found a holodisk while searching the wastes for technology. When it was put onto the system, it infected their database terminals with a virus. The virus was originally put on a holodisk by "some pre-War jackass with nothing better to do", as said by the annoyed Scribe Ibsen. The computer virus infected a few computers in the bunker, and the Courier is asked by Ibsen to 'partition' the virus for Ibsen.

The Courier must find the virus on 3 terminals in 60 seconds to wipe it from the system. To do so, quickly enter each terminal and choose the only option one can. Then, if the text that shows up seems like a random string of letters and numbers, proceed to the next terminal. If one gets a taunting message on the second screen, choose the option to isolate the virus. The infected terminals are almost always in a row or close together in a group. The virus usually has one per section (such as 1 in the middle). If the player character does not get all 3 terminals in the time limit, they will have to speak with Ibsen again. One will get a new 60 seconds and the terminals that the virus has infected will randomize. One can try taking some turbo to gain a few extra seconds. Note that the virus can jump to the terminal Ibsen is standing in front of.

With a high enough Science skill (70), one can suggest partitioning the terminals when the virus jumps to it, giving read only access to the kernel administrator. This isolates the virus on that terminal permanently and leaves the player character with one fewer terminal to find should they fail.

The virus can be partitioned easily by saving immediately after Ibsen tells the player character it has jumped and after finding and isolating the virus. The terminals the virus jumped to will be consistent when you re-load the saved game.

The behavior of the virus is similar to the world's first computer virus "creeper" created in 1971. The first real computer virus was released by an employee of a company working on building ARPANET, the Internet’s ancestor. Creeper looks for a machine on the network, transfers to it, displays the message “I'm the creeper, catch me if you can!” and starts over.

Retrieved from "https://fallout.fandom.com/wiki/Hidden_Valley_computer_virus?oldid=3288778"
Community content is available under CC-BY-SA unless otherwise noted.