Fallout: New Vegas
“Then allow me to explain our situation. This bunker is currently locked down, allowing no entry or exit, with you being one of the few exceptions.”— Elder McNamara

The Hidden Valley bunker is a location in the Mojave Wasteland in 2281. It is located southeast of Sloan. There are four bunkers in close proximity to one another within Hidden Valley, one of which is the entrance to the home of the Brotherhood of Steel.

Located in a valley protected by the pre-War DERVISH camouflage system, serving as a cloaking mechanism for the bunkers within.[1] In the event that the location was threatened, the bunker's DERVISH camouflage system would make targeting the site impossible for automated systems.[2] These bunkers contain the CANDLE fusion power system, providing power for an estimated 752 years.[2]

The fast travel location can be distinguished by a hollowed-out rock marked with a heart and "no bomb" graffiti, which is located northwest of the entrance. A small broken tree stump sits directly on top of the dome, which is unique to this bunker and sets it apart from the others nearby. The cement wall around the bunker's door includes graffiti that reads "BAN THE BOMB" and "GIVE PEACE A CHANCE!!!"

If at least one of the holotapes is in the inventory, the option to speak its passphrase into the intercom will be available. Alternately, access can be gained by picking the Very Hard lock, by having Veronica Santangelo as a companion, or by advancing far enough into any storyline to be asked to investigate the Brotherhood. If Veronica is not with the Courier, they will be arraigned, questioned, and forced to begin the Still in the Dark quest.

The facility is divided into an entrance area and two main levels. After entering the bunker there is a large entry room with a Hard locked door on the opposite side, similar to all the other bunkers in Hidden Valley. On the other side of the locked door is an empty room with open doorways to the left and right, which are guarded by at least two stationary paladins on the opposite wall. They do not appear if Veronica is present. The doorway to the left leads to a small office with a desk and a computer terminal, while the doorway to the right leads a staircase going down to the main section of the first floor.

The first floor contains the personnel quarters, a shooting range, armory, medical bay, and an instruction room where Initiates are trained. After turning right down the set of stairs into the bunker, turn left, then right, until reaching two sets of dorm rooms located one above the other, with a set of descending stairs to the lower room. Each bed has a footlocker with a combination of mid-condition laser pistols, energy cells, and/or microfusion cells.

The second floor contains the command room with living quarters for the Elder and Head Paladin Hardin. Located next to it are an archive/computer room for the scribes, a workshop for the knights to repair and manufacture equipment, and a room containing virtual reality chambers that surround the bunker's main reactor. The second floor features the Brotherhood of Steel emblem on the wall and two paths that go off to the east and to the west.

The west area has the command room with Elder McNamara and another adjoining hallway. Head Paladin Hardin is further down the hall and can be found in either one of the two rooms beyond the first.

Alternatively, terminals on the same floor of the bunker will provide a password. If the terminal is successfully hacked, or the password is obtained, the Courier can initiate a self-destruct sequence that will immediately Vilify them with the Brotherhood of Steel, cause all Brotherhood of Steel members to become hostile, and result in a large negative Karma penalty when exiting the bunker. The sequence can be aborted by reactivating the terminal and choosing to abort, however, this has no effect on their hostility.

Veronica: "I'd like a large atomic shake and a double Brahmin burger. And easy on the agave sauce this time."
Ramos: "We gave you a password, Veronica. It's for your safety."
Veronica: "Open up, Ramos. I know where you live."
Ramos: "(sigh) For Pete's sake. Opening up. Welcome back, Veronica."

The Hidden Valley bunker appears only in Fallout: New Vegas.

There is a real world trailhead of the same name and location in Sloan Canyon National Conservation Area in Clark County, Nevada. 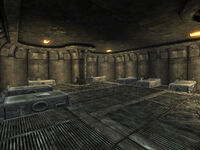 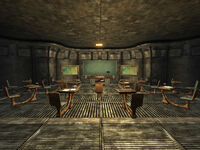 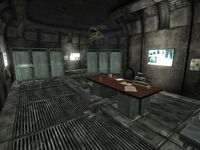 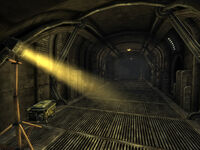 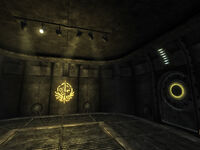 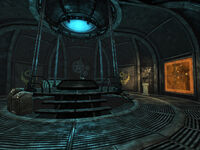 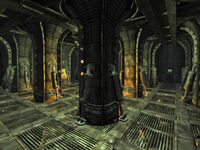 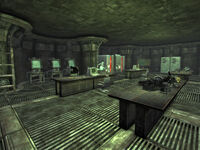