ED-E My Love
Eyesight to the Blind
For the Republic, Part 2
I Could Make You Care
Render Unto Caesar
Still in the Dark
Tend to Your Business
The House Always Wins
Wild Card: Side Bets
Brotherhood Bond
Hidden Valley computer virus
Pistol Packing

Fallout: New Vegas
“Scavengers report hulking individuals moving around Hidden Valley after dusk, but have been unable to identify them due to low visibility.”

Hidden Valley is a military installation nestled between hills and rocks roughly northeast of the New California Republic Correctional Facility (NCRCF) and southeast of Sloan. The valley is home to numerous bark scorpions and the remnants of the Mojave chapter of the Brotherhood of Steel that once occupied HELIOS One before being defeated by the NCR during Operation: Sunburst.

Once one of the most pristine natural basins in the McCullough Range, Hidden Valley was a destination for hikers wishing to experience the untamed wilds of Nevada. However, with hostilities escalating across the globe and the Sino-American War continuing with no end in sight, it fell prey to the military-industrial complex. The United States Air Force declared it a testing range, surrounding the area with a chain-link fence, forbidding photography, and then completely forgot about it. The secrecy of project likely so buried in bureaucratic red-tape that no one who could've used it knew about it. To the casual observer, it was just a stretch of federal land, cordoned off, abandoned, and covered in graffiti protesting the futility of the Sino-American War.[Non-game 1] The perception changed little after the Great War, with wastelanders seeing it as little more than a stretch of particularly desolate wasteland, home to derelict bunkers, mute intercoms, and bark scorpion.[1]

Of course, this was all a ruse. The USAF selected the remote Hidden Valley to establish an independent, self-sustaining underground bunker, using the same technology used at Raven Rock. The facility was intended for use by high ranking personnel and other VIPs as a shelter and command center in crisis situations. The bunker was built several hundred feet (over 100 meters) below ground, beneath multiple layers of reinforced materials in order to ensure that nothing short of a direct hit by a bunker-busting megaton nuclear weapon could threaten the installation. Such capacity was believed to be well outside the United States' closest competitors, but the bunker was provided with additional protection in the form of the DERVISH camouflage system. This complex network of industrial vents and fans generated an artificial sandstorm using the loose soil within Hidden Valley, which was supplemented by a combination of aluminum and silicates to create what was essentially a giant cloud of chaff, interfering with remote guidance systems. Together with the Black Mountain radar array and its electronic countermeasures, targeting the Hidden Valley bunker network was effectively impossible, assuming its existence was known in the first place.[2]

The bunker itself was furnished with every facility necessary to its continued operation in the event of a catastrophic event, including a variety of living quarters ranging from bunk rooms to individual chambers, a fully stocked clinic capable of carrying out complex surgeries, vast store houses, shooting ranges, workshops, research labs, a virtual reality training system, everything needed for prolonged isolation. In order to ensure longevity, the bunker was fitted with a CANDLE fusion power system. Powering all the bunker's systems, it was a mature and tested technology. Although newer designs offered a higher power output, the CANDLE offered reliability and longevity, capable of powering the bunker for an estimated 752 years (until ca. ~2700).[2]

The fact that Hidden valley survived the Great War is a testament to its countermeasures and Robert House's defense of the Mojave. Over the next two centuries, the bunkers were abandoned and fell into disrepair, with large parts of the installation caving in due to lack of structural maintenance, salvaging, or design. It wasn't until the 2260s and the arrival of Elder Elijah at the head of the newly founded Mojave Chapter that it gained a new lease on life, set up as an auxiliary location and fallback point for the chapter, second to Helios One.[3] It was "promoted" to a chapter bunker following the disastrous Operation Sunburst in 2276 when the chapter was routed from its stronghold at Helios and forced to flee into the McCullough Range. The new Elder, Nolan McNamara, instituted a lockdown: All Brotherhood members who made it into the bunker were confined inside, while those outside the bunker were prohibited from returning to prevent the NCR from tracking the chapter down. Only a select few were permitted to leave to procure essential supplies or to patrol the Hidden Valley at nighttime, under cover provided by the DERVISH.[Non-game 2]

Though the Brotherhood prepares its members for extended seclusion through its ascetic training, the situation is slowly deteriorating. Five years after the loss of Helios, many of the Knights and Paladins promoted to fill in the gaps in manpower have no real combat experience, relying on virtual reality simulations and firing range exercises, the chapter is incommunicado to the rest of the Brotherhood, and internal tensions are simmering beneath the surface as Head Paladin Hardin is looking for a way to oust the current Elder and implement his policy.[4] Unbeknownst to all but the Elder and Knight Lorenzo, the bunker itself is slowly failing. The DERVISH system was not designed for constant use and the accumulation of enhanced dust in the ventilation system is taking its toll on the bunker's life support systems. Simply put, if the systems are not fixed, the bunkers would become uninhabitable in short order. The Elder attempted to send scouting parties out to retrieve the parts, but a lack of intel (caused by the skewed priorities in the Elijah era) and local hostiles resulted in the loss of all patrols.[5]

Finally, the single biggest threat to Hidden Valley and the Mojave Chapter are the powers that vie for control of the Mojave. Mr. House and Caesar want the Brotherhood removed from the picture, seeing them as a threat to their control of the region, while the Republic is willing to sign a truce in exchange for military aid (if the Courier plays their cards right).[5][6] Hiding is not an option, as even if the life support systems were restored to full functionality, all factions are aware that the Brotherhood is still lurking somewhere in the McCullough Range. After all, it only took House two years to figure it out, after losing a single Securitron per annum in the vicinity of Hidden Valley.[7]

The Hidden Valley is a large basin located east of Sloan, between Black Mountain and the NCR Correctional Facility. It's easily identifiable by the damaged fencing surrounding it, four distinct bunkers buried under the sand, and working industrial fans, on top of several bark scorpions and occasionally larger radscorpions preying on them. There are four bunkers in total, located in cardinal directions along the edges of the area. There's a large break in the fence to the south-east, leading to the Scorpion gulch and the El Dorado Valley beyond.

Four Brotherhood of Steel Paladins will leave the western bunker for a patrol, covered by the DERVISH camouflage system, between 01:00 and 03:00 patrolling around the bunker until just before dawn.

This ruined bunker contains a pair of skeletons on a sleeping mat with a bottle of wine and a suitcase, which suggests a sad story. There is also a campfire. The Easy locked door in this bunker hides a hundred 5mm rounds and anywhere between 20-24 5.56mm rounds.

Perhaps the most intact bunker, aside from the one leading to the installation. It contains ancient supplies illuminated by blue fluorescent lamps and an Average-locked door leading to 2 mini nukes, a stimpak and some 5.56 mm ammunition.

A largely derelict bunker, it has been recently taken over by an NCR Ranger, who plans to turn it into a safehouse in order to watch the Interstate from the safety of the Hidden Valley. The camp contains two grenade bouquets can be disarmed in the entrance hallway hanging from the ceiling, and a third out of reach near the middle of the entry room. The entry room also contains a sleeping pad and a sack, along with a journal indicating that someone is using the bunker as a safe house. The Hard locked door here opens the way to three ammunition boxes, a mini nuke hidden under a tin plate, a steam gauge assembly and two pieces of scrap metal on the right, and some frag grenades and 5.56mm rounds on the left.

If the Courier enters the west bunker without Veronica as a companion, they will be assigned a task to remove an NCR ranger from this bunker. After dealing with the ranger OR making contact using Veronica OR answering the summons for ED-E, a trip-wire triggering the grenade bouquets will appear in the entry room door, along with more entry room grenade bouquets (one to the left can be disarmed). The entrance hall grenade bouquets previously mentioned will also respawn if disarmed earlier.

The Ranger will appear if Still in the Dark is activated and the Brotherhood forces the player to resolve the situation with him.

The fourth bunker contains the hidden elevator to the facility, easily identifiable by a tree stump on top of the entrance. The entrance hall has little in the way of interest, while the door into the bunker is protected by a Very Hard lock. The player can obtain access by:

This might not be necessary. I might be able to
add a top level topic for telling her what you
found out and simply have it check to see if you
discovered the PTSD sim. 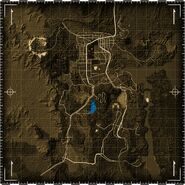 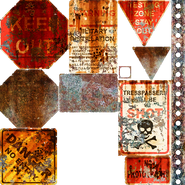 Pre-release promotional image of the entrance to the Hidden valley