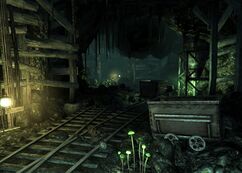 “He was a mean old man, owned this whole mine a million years ago. Made the miners work real hard, and didn't give them any money for their kin.”— Kenny

Herzog Mine is a location in Point Lookout. Herzog Mine is set into the rock, to the south of the Ark & Dove resting grounds and southwest of the Coastal grotto.

The Herzog mining site was named after its owner, Old Man Herzog, who put his miners through poor working conditions. According to Kenny, who lives in the mine, a group of miners sat down and refused to work any longer in the mine's poor conditions. In response, Herzog blew up the site with a "million million tons" of dynamite, killing the miners. As a result, no one else was willing to work in the mine, leaving it abandoned by all but Herzog. After he detonated his explosives, Kenny says that old man Herzog then hung himself.[1]

The swampfolk believe the mine is haunted, and most of them thus avoid it. Kenny uses this to his advantage, noting that those who do enter the mine are easy to scare away with a few simple traps.[2]

Herzog Mine is set into the rock cliffs south of the Ark & Dove resting grounds. It can be accessed by a path down the rocks from the top of the cliff, or by climbing up to it from the beach below. It consists of a small cave entrance with some rubbish around.

The mine consists of a linear set of cavernous passages winding into the cliffside. Various branches of the mine have collapsed, due to explosives set off before the Great War. Kenny is the mine's only inhabitant, and has set up numerous traps to make the mine seem haunted, including bear traps. Eventually, winding through the passages will lead to Miner's Rest, or Kenny's cave.

Kenny's cave is a section of Herzog Mine in which Kenny has taken up residence. From here, the mine can be exited via a ladder in Kenny's living space. A door to Blackdamp Shaft can be found opposite Kenny's encampment.

Blackdamp Shaft consists of a series of vertically descending cavern tunnels infested with mirelurks and partially flooded with radioactive water. To reach the bottom of the shaft, one can either travel through the mirelurk-infested tunnels or jump down the mine shaft, located near the entrance. In either case, the only way back up is through the tunnels.

Near the bottom of the shaft, the skeleton of Herzog can be found hanging from a noose, surrounded by pre-War money scattered on the floor.

Herzog Mine appears only in the Fallout 3 add-on Point Lookout.

Old Man Herzog's skeleton
Add a photo to this gallery

Retrieved from "https://fallout.fandom.com/wiki/Herzog_Mine?oldid=3429828"
Community content is available under CC-BY-SA unless otherwise noted.