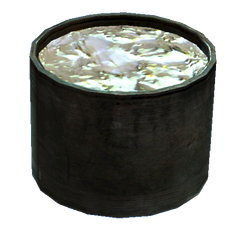 Hermit crab meat is a consumable item in the Fallout 4 add-on Far Harbor.

Meat from the fairly rare hermit crabs that call the Island their home. While the raw item is tied with queen mirelurk meat for maximum radiation damage among consumables, its cooked counterpart beats mirelurk queen steak in stat boosts and ties in restored health.

Found on the body of dead hermit crabs.

Hermit crabs do not respawn after being killed, making hermit crab meat finite.

Retrieved from "https://fallout.fandom.com/wiki/Hermit_crab_meat_(Far_Harbor)?oldid=3239139"
Community content is available under CC-BY-SA unless otherwise noted.