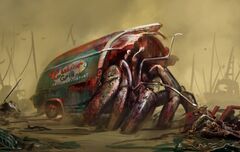 The hermit crab is a creature in the Fallout 4 add-on Far Harbor.

This section is transcluded from Hermit crab. To change it, please edit the transcluded page.

The hermit crab still resembles its unmutated pre-War ancestor closely both in appearance and habits, with the only major difference being its immense size. Towering head and shoulders over any human, hermit crabs are far too large to protect their vulnerable abdomen by squeezing it into an empty gastropod shell. Instead, they use wrecked vehicles to facilitate their ambush hunting style.

Hermit crabs are giant creatures on par with fog crawlers, mirelurk queens and super mutant behemoths. The creatures are short in stature and infrequently encountered on the Island. They utilize vans as a stand-in for their shell, such as those bearing Lobster Grill logos.

When approached, the crab will attack, utilizing its claws. They will stay stationary, not seeking out prey unless other creatures are in close proximity, in which case the crab will comb the area. This will occur in the case of the Sole Survivor, even if they are hidden. The hermit crabs inflict high levels of damage and have high HP, but are slow-moving enemies. They cannot traverse some landscapes, will not enter buildings, nor climb over obstacles. At times they will retreat to their shell and produce hatchlings in groups of up to six that will aid in their attack.

Hermit crab hatchlings are identical to mirelurk hatchlings. They look similar (except the color of the skin), show the same behavior and are equally weak in combat, although they can swarm the player character in large numbers.

The average example of the species. These massive crustaceans are far too large for regular shells and have instead replaced them with "Lobster Grill Family Restaurant" brand trucks.

A hermit crab that has absorbed large doses of radiation and is glowing because of it.

The albino hermit crab is the strongest variant of its kind. It has white skin and red eyes.

The Waves Crest Orphanage albino hermit crab in its shell.

Oceanarium hermit crab before revealing itself

Oceanarium hermit crab out of its shell