Hermit crabs are creatures in the Fallout 4 add-on Far Harbor and Fallout 76.

The hermit crab still resembles its unmutated pre-War ancestor closely both in appearance and habits, with the only major difference being its immense size. Towering head and shoulders over any human, hermit crabs are far too large to protect their vulnerable abdomen by squeezing it into an empty gastropod shell. Instead, they use wrecked vehicles to facilitate their ambush hunting style.

Hermit crab hatchlings are identical to mirelurk hatchlings. They look similar (except the color of the skin), show the same behavior and are equally weak in combat, although they can swarm the player character in large numbers.

The average example of the species. These massive crustaceans are far too large for regular shells and have instead replaced them with "Lobster Grill Family Restaurant" vans.

Utilizing vans as protection and to blend in with their environment, these variants are larger, ambush unsuspecting prey, albeit at slower speeds.

Capable of a powerful ambush and swinging claw attack, this variant has higher levels of hit points and damage resistance, retaining the same slow speeds.

A hermit crab that has absorbed large doses of radiation and is glowing because of it.

Faster than the predecessors, this strong variant also has significant hit points. Capable of dealing large amounts of damage utilizing attacks with its claws.

The albino hermit crab is the strongest variant of its kind. It has white skin and red eyes.

Hermit crabs appear only in the Fallout 4 add-on Far Harbor and in Fallout 76. 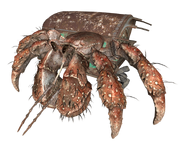