In 2073, the Bloomfield Space Center was in the process of building the Hermes-13 rocket that would take brave United States Space Administration astronauts to Mars. However, as nuclear proliferation reached an all-time high, the U.S. government completed a space station/satellite that housed two-dozen nuclear missiles each carrying four warheads as a reaction to possible nuclear threats, named the Ballistic Orbital Missile Base, or the B.O.M.B.-001. It was considered the ultimate offensive weapon. The only things missing were the main power reactor and launch instructions and codes.

However, since all other space and rocket facilities already used up their resources constructing the missiles for the station, and launching the cargo rockets to carry them to the base, the U.S. needed to scramble to get the much needed codes and a power reactor to the station. Their answer was to convert the Mars rocket into the vehicle that would carry the codes and reactor to the base. The conversion started in 2074.

In August 2076, the Hermes–13 space rocket was completed and ready to launch at Bloomfield. Unfortunately, by October 2076, funding for the rocket and Bloomfield had to be drastically cut and diverted to vault technology, thanks in large part to the rising world tensions and imminent threat of nuclear war – the launch of Hermes-13 had to be put on hold. All personnel, except for a skeleton maintenance crew, were reassigned to other locations. Bloomfield, B.O.M.B.-001, and Hermes-13 were essentially mothballed. In November 2076, the Enclave seized control of Bloomfield Space Center. They knew the nuclear war was just around the corner, so they tried to refit the Hermes-13 and convert it into a vehicle that would take selected personnel (mainly themselves) off-planet, destination yet to be determined.

Unfortunately for the Enclave, the bombs started dropping less than a year later. All were either relocated to "hot-spots" or took cover away from Bloomfield. The last people to leave shut down the sub-reactor to Bloomfield and abandoned the facility, leaving Hermes-13 and Bloomfield to brave the elements.

The Hermes-13 space rocket was to appear in Van Buren. 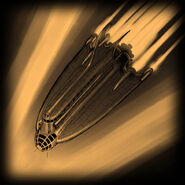 Shuttle concept art by Robert Nesler
Add a photo to this gallery
Retrieved from "https://fallout.fandom.com/wiki/Hermes-13?oldid=3310628"
Community content is available under CC-BY-SA unless otherwise noted.