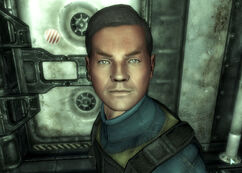 Evil (in Growing Up Fast and Escape!)
Neutral (in Trouble on the Homefront)

“Don't think I don't know it. Why do you think I'm letting you go? I guess you're trying to follow your dad... outside. Good gravy, if I didn't know what the Overseer would do if he caught you, I'd never tell you to try for it, but it's your only shot. You take care and I hope you find your daddy.”

Officer Herman Gomez is a resident and officer of vault security of Vault 101 in the year 2277.

The classic good cop, Officer Gomez is Freddie's dad. He has no patience for the Tunnel Snakes and tries to make sure that Freddie doesn't have anything to do with them. This is hard, because there may not be any other boys Freddie's age in the vault.[1]

* Only drops a finger during Growing Up Fast and Escape!.

Herman Gomez appears only in Fallout 3.

When returning to the vault during Trouble on the Homefront, he will have an entirely different voice type. This is due to him using the same dialogue as Officer Armstrong, who would appear in the quest fulfilling Gomez's role if he died during Escape. Since no dialogue was recorded separately by Jeff Baker, Gomez was simply given the same dialogue.

Gomez, during Escape!
Add a photo to this gallery

Retrieved from "https://fallout.fandom.com/wiki/Herman_Gomez?oldid=3316145"
Community content is available under CC-BY-SA unless otherwise noted.