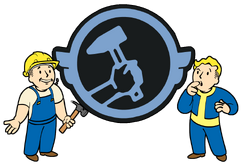 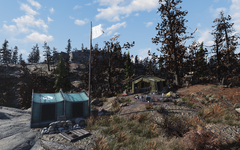 “Strangers to Appalachia. Coming to stay.”

Here to Stay is a main quest in the Fallout 76 update Wastelanders.

The Vault 76 overseer wants to make sure that the new arrivals in Appalachia, both the raiders and the settlers, are inoculated against the Scorched Plague.

This quest is given by the Vault 76 overseer at her home, alongside the quest Strange Bedfellows, in which the first step will be traveling to Foundation at Spruce Knob, and talking to Paige in the underground Founder's Hall. After warning him about the danger of the Scorched Plague, he is willing to believe them, but wants Aubrie Willem, the Foundation's co-founder and doctor, to confirm the necessity of inoculation against the plague.

Aubrie can then be found at a small camp northwest of Vault 96, which is seen to have been overrun by the scorched. After disposing of them, the player character has to inspect the dead bodies (Luck 8+ allows one to search one of the bodies for clues; another can be searched with Perception 8+ to yield two stimpaks and a trail), and after examining all four bodies, a trail will be discerned that leads north.

The trail of footsteps leads to a secluded cave where Aubrie can be found still alive, spooked, and will at first accuse the player character of being one of the scorched (he can be pacified with Charisma 4+). Once the plague and the inoculation against it is mentioned to him, Aubrie will ask about the specifics of the plague, and an Intelligence 4+ allows for quickly summarizing the transmission method, incubation period, and the availability of an inoculation. Once Aubrie has been convinced, the player character can return to Foundation and report to Paige that Aubrie backed them up and the inoculation is necessary, which will complete the quest.

Upon completing the quest, if the player character chooses to leave Aubrie in quarantine, they can return to the secluded cave later on to find that Aubrie had committed suicide, and left a note on the crate he is propped up against.

Retrieved from "https://fallout.fandom.com/wiki/Here_to_Stay?oldid=3381054"
Community content is available under CC-BY-SA unless otherwise noted.