On the docks behind the Shamrock Taphouse
Oceanfront
Yangtze
Saugus Ironworks

000229F7
“There's a sea monster in the harbor! I saw its eye peek up out of the water and look around.”— Donny Kowalski

Here There Be Monsters is a side quest triggered by speaking with Donny Kowalski, who's located on the docks behind the Shamrock Taphouse. He'll excitedly tell the Sole Survivor he has been seeing an eyestalk peeking out of the water off the docks and will remain convinced it belongs to a sea monster, regardless of how the player character may respond. Through this dialogue, the quest will begin and the Yangtze submarine will be placed on the map, located directly in front of the pier Donny is standing on. It'll take a short swim to reach and is easily visible as a periscope covered in seaweed juts out of the water and often moves up and down. Alternatively, the quest can be started by simply swimming to the Yangtze.

Once in the submarine, one can speak to Captain Zao who is located in the first main room. He questions why the Sole Survivor is there, remarking that the war is long over and tells them that he has no treasure on board to plunder. He will go on to explain how his submarine ended up as it is and express surprise that he's been there for over 200 years already.

He will then share that his ship is no longer seaworthy and will ask for help fixing it. Once the player character agrees to help, he advises that a dampening coil has been damaged and that he needs a new one, of which his wartime intelligence told him could be found in Saugus Ironworks. At this point, he can be pushed into three different rewards with speech checks of increasing difficulty. He'll start by offering pre-War money, stating it must still have some value. He will offer caps if pushed further and if the final speech check is passed, he will reluctantly offer his sword as a final reward. If Out of the Fire has already been completed, the dampening coil may already be in the player character's possession. If so, there will be a speech option to hand it over.

Traveling to Saugus Ironworks, located directly south of the Slog, reveals several enemies known as the Forged who populate and defend the inside and outside of the building. They wield flamers and will use Molotov cocktails. If this location has already been explored and cleared out before, additional enemies may not be present.

The blast furnace is inhabited by Slag, the leader of the Forged, and entering the room will initiate dialogue with him. It may be possible to retrieve the dampening coil without killing him and the others inside, but they will attack the player character at the end of the dialogue regardless. Once Slag is defeated and the others in the room dealt with, the dampening coil can be found in the back right part of the room on the ground level, as part of a large blue circular 'button'. Take it and travel back to the Yangtze.

He will give instructions to insert the dampening coil into the submarine followed by the warhead. If this is done in the reverse order, the submarine will explode, ending the quest and the Sole Survivor's life. Once this is done correctly, speak to Zao one final time. He will reward the player character with three homing beacons, each of which allows for one tactical nuclear strike, ending the quest. If any or all of the speech checks were passed at the beginning of the quest, he will also give them 4 stacks of pre-War money for the first passed speech check, 200 caps for the second passed speech check, and his unique sword, Zao's sword, as the result of passing all three.

The name of the quest is a reference to the phrase "here be dragons." 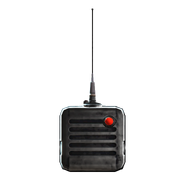