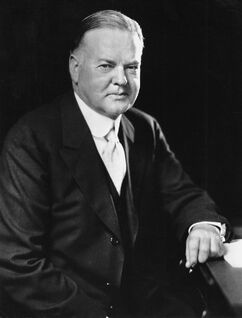 31st President of the United States

President Hoover held office during the onset of the Great Depression. Prior to serving as president, Hoover served as the director of the U.S. Food Administration and served as the third U.S. Secretary of Commerce.

Herbert Hoover is not directly mentioned in the Fallout series, however, the Hoover Dam, which was named after him, appears prominently in Fallout: New Vegas and All Roads.

Herbert Hoover's official presidential portrait
Add an image to this gallery
Retrieved from "https://fallout.fandom.com/wiki/Herbert_Hoover?oldid=3262736"
Community content is available under CC-BY-SA unless otherwise noted.