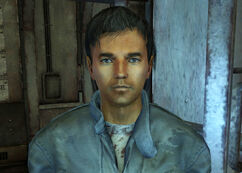 “This place could use a few more people willing to work. Everything is falling apart and I'm the only one willing to fix it.”

Henry Young is a handyman who lives in Rivet City with his wife, Christie, and daughter, C.J. in 2277.

Henry's responsibility is general handiwork in Rivet City. Because of the frequency of repairs and the size of the settlement, he rarely has time to see his daughter C.J. Henry frequently laments the lack of people in his line of work and is privately frustrated with how few residents seem to pull their weight.[1]

The Runaways: If C.J. Young runs away with James Hargrave, he will tell the Lone Wanderer that she is missing and ask them to find her. If he is killed stealthily, a guard will replace him and ask instead.

Henry Young appears only in Fallout 3.

Retrieved from "https://fallout.fandom.com/wiki/Henry_Young?oldid=3354796"
Community content is available under CC-BY-SA unless otherwise noted.