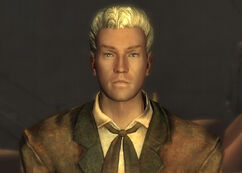 You Can Depend on Me

“Shove off. You're making my luck turn bad.”

Henry Jamison is the corrupt, wealthy manager of the New Vegas branch of the Crimson Caravan, residing in Freeside in 2281. He can be found at the Atomic Wrangler.

Henry Jamison is part of the aristocratic Jamison family, a clan of wealthy and influential Brahmin barons from Redding in New California who have invested heavily into the Crimson Caravan.[1] His father arranged for Henry to be offered a CEO position of the New Vegas branch of the Crimson Caravan as well as to get Henry out of the way for the family.[2][3] With pressure from the Jamison family, Alice McLafferty posted Henry at the New Vegas branch.

Henry was far from suited for the job, always keeping the New Vegas branch underperforming due to his poor management skills before Alice McLafferty was sent from the Hub to straighten out the branch. Being arrogant, self-centered and irresponsible, Henry cares very little about anything besides indulging himself on gambling, drinking and prostitutes that the position can offer him and holds McLafferty in contempt for attempting to sack him.[4] With his gambling, he's built up a rather large debt with the Omertas, which he has yet to put a dent in, despite knowing fully of what the Omertas are capable of.[4]

Because of his poor management of the New Vegas branch, the Crimson Caravan wants him gone, but his family ties won't allow him to be fired. Alice McLafferty has tried urging him and his parents to make him quit or allow her to fire him, but both refuse. She is looking for someone who can help her oust him from his position. Henry can be found in Freeside gambling more at the Atomic Wrangler on the slots. For him to quit the Crimson Caravan, he wants all of his debt to the Omertas paid off in addition to a hefty severance package.[5]

Retrieved from "https://fallout.fandom.com/wiki/Henry_Jamison?oldid=3403862"
Community content is available under CC-BY-SA unless otherwise noted.