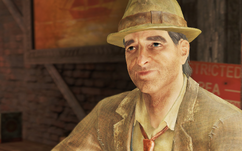 Henry Cooke is the owner and barkeeper of the Colonial Taphouse and an Institute SRB informant for fugitive synths, living in his house in Diamond City's upper stands in 2287. Often going by his last name, Cooke is also an associate of chem trafficker Marowski.

Cooke is the bartender of the Colonial Taphouse bar in Diamond City's upper stands, favored by the city's wealthier residents. The establishment is the primary competitor of the Dugout Inn, frequented by the city's working-class citizens. He is known to be in a relationship to Darcy Pembroke, even though she is already married and has a son. Darcy's husband Paul often gets into fights with Henry Cooke over her affair with him.

Henry is also an associate of chem trafficker Marowski, represented by Nelson Latimer, who regularly meets up with the dealer's Goodneighbor contact, Trish, to conduct an operation to smuggle drugs into Diamond City as a way circumvent the hefty taxes passed on chems in the city by Mayor McDonough.

In spite of all the synth paranoia and anti-Institute propaganda that circulates through the streets of Diamond City following the Broken Mask incident, Henry Cooke is one of the few residents of the city that (secretly) has connections to the mysterious scientific organization; feeding information to the Synth Retention Bureau on the whereabouts of fugitive Gen-3's, in return for caps.[1]

If the storyline progresses to where Cooke leaves, and the player character follows him, they will eventually find him settling in Bunker Hill. He walks in and takes a seat on a chair. No matter how long they wait, he does not move from that chair. However, he doesn't remain there, as the game deletes the character after fast travel.

Henry Cooke appears only in Fallout 4.

Retrieved from "https://fallout.fandom.com/wiki/Henry_Cooke?oldid=3463877"
Community content is available under CC-BY-SA unless otherwise noted.