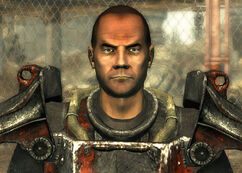 “You'd better believe it. I haven't seen a suit like this in a long time. And what would you like for this little surprise?”

Protector Henry Casdin is the leader of the Brotherhood of Steel Outcasts in the Capital Wasteland in 2277.

Splitting from Elder Lyons and the rest of the Brotherhood of Steel, Casdin and his fellow soldiers were of the opinion that Lyons had "gone native," concerning himself with the troubles of the locals instead of the "greater" mission: the acquisition of technology. Lyons has not even bothered to get his giant robot working, let alone continue the search for technology. In Casdin's eyes, the Outcasts are the true Brotherhood of Steel, carrying on the missions of the main West Coast contingent.[1]

According to Elder Owyn Lyons, he was one of the best fighters in the Brotherhood of Steel before he took other Brotherhood members and formed the Outcasts in order to continue the original mission.

If asked about the Outcasts, he will comment on how he fought side by side with Elder Lyons in the Scourge of The Pitt. He recalls how the Brotherhood was forced to watch over small towns instead of gathering technology. This ultimately led to the split of the Brotherhood and Protector Casdin becoming the Outcast leader.

Henry Casdin appears only in Fallout 3.