HairCombOverOld
“Nice work with the Nightkin. I've never seen anyone able to talk their kind out of anything once they had their mind set to it.”— Doctor Henry

Doctor Henry is a physician and former Enclave scientist living in NCR town in 2241 and in Jacobstown in 2281.

Described as difficult to figure out but passionate about his research, Dr. Henry previously worked with the Enclave on canine cyber-genetics.[1][2] His specialization was in both human and canine neuroscience.[3] He also worked on the development of a mutagenic serum, aiming to cure super mutants as an alternative to the Enclave's initiative to kill the afflicted.[4][5] The doctor and Enclave leadership did not see eye to eye, enough so that Henry chose to leave.[6] He tells the Courier that leaving was the right decision, as the Enclave oil rig was destroyed shortly after his departure.[6][7]

After leaving the Enclave, Dr. Henry integrated into the New California Republic, setting up a clinic in NCR town. Although some remnants of the Enclave will not speak about their past involvement with the group, one of the citizens of NCR town shares that they have heard about the Enclave from Henry, who spoke about it at length while drunk.[8] His research gained the attention of Merk, the local crime lord, who sought assistance in stealing Henry's blueprints for building cybernetic canine guard units.[9] As payment for assisting him with serum field work, Henry gives the Chosen One a cyberdog known as a Cyber-Hound Mk. II.[10]

After moving on from NCR town, Dr. Henry spent time traveling with caravans, where he met with Gibson.[11] He subsequently relocated to the Mojave Wasteland, joining other Enclave remnants fleeing death at the hands of the NCR and Brotherhood of Steel.[12][13] He settled in Jacobstown, establishing his lab in the lodge. It is here that he researches the effects of prolonged Stealth Boy Mark II prototype usage by Nightkin, mentioning that his current lab is not as impressive as the facilities he had access to while in the Enclave.[3][14] His primary objective is to cure the Nightkin's schizophrenia, but he is also capable of performing brain transplants for cyberdogs despite not having worked in the field recently.[3][15][16]

Henry in the ending slides of Fallout: New Vegas 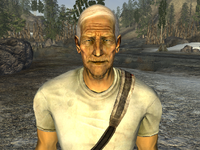 Henry without his glasses