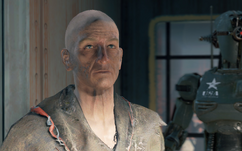 Brother Henri is a member of the Church of the Children of Atom in 2287.

Brother Henri was sent to the Sentinel site, a nuclear launch site located in the Glowing Sea, by Mother Isolde to claim the various atomic weapons stored there. Despite being the sole survivor of his group after his fellow children were massacred by feral ghouls, he continues to guard the main bomb storage with support from a machinegun turret and Atom's Wrath, a named but otherwise normal assaultron.

Henri appears only in Fallout 4.

Retrieved from "https://fallout.fandom.com/wiki/Henri?oldid=3289389"
Community content is available under CC-BY-SA unless otherwise noted.