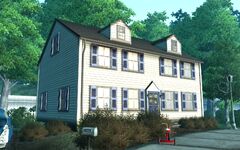 The Henderson residence is a house in the Tranquility Lane simulation in Fallout 3. It is the residence of Mabel Henderson.

As with all houses in Tranquility Lane, it has two stories with the front door entering into the lounge, which in addition to the normal lounge furniture items, features a chandelier, Radiation King radio, and robotic assistance in the form of a Mister Handy. The other ground level rooms are a kitchen, which contains a terminal, and a bathroom. Upstairs, the house has another bathroom and a bedroom with two single beds. At the top of the stairs, there is a roller skate found on the floor.

The Henderson residence appears only in Fallout 3.