Operation Tidy
Thrill of the Grill

Hemlock Holes is a location in the Toxic Valley region of Appalachia in 2103.

Hemlock Holes was once the premier golf course in the Grafton area with a total of nine holes winding through scenic woods and waterways. Mister Handy instructors were also available for rent. Visitors could also enjoy the Hemlock Holes diner, famous for its nine alarm chili, golf clothing stores, and numerous events for casual visitors and club members. Members received a 2% cut on all greens fees and access to exclusive events like Golfing for Geese, Blindfolded Drives and Speed Golf. Children, on the other hand, could enjoy Diving for Balls and Club Polishing.[1] However, the golf course's owner, James Waltz, dreaded running the business after inheriting it from his father, and complained about its location in the "ass-end" of the county.[2]

The golf club fell out of use after the Great War, doomed by the pollution spread by Grafton Steel and the absence of time for recreation. A military vertibird has crashed out in the field, though its crew managed to erect a communications tower before perishing.[3]

This location consists of a large building with a deck area overlooking what remains of the Hemlock Holes golf course to the south. The building has two main sections - a dining area and a shop area.

The dining area has dining booths with a variety of silver plates and TV dinners trays which used to hold food for pre-War patrons. The food preparation and serving area are on the eastern wall of the room, next to the door leading outside to the outdoor seating area where there are yet more tables and chairs.

The shop area includes display shelves and a large shop counter where pre-War customers would have hired their golfing equipment. The equipment stored behind the counter includes a golf club, pencils for score taking, and several green baskets of golf balls. There is also a wall safe behind the counter.

Behind the building are yet more picnic tables and a cooking station. The Hemlock Holes cook oversees a set of grills in this area, sometimes asking player characters for their assistance in preparing for a cookout.

In the southern field, a scorchbeast lure lies within a small defensive position. A rusty Pick-R-Up truck fortified with sandbags overlooks the area, with a pond and crashed vertibird further to the east.

Hemlock Holes appears only in Fallout 76.

Field to the south 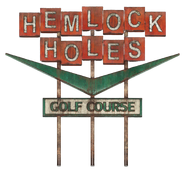