Cult of the Mothman (formerly)

Fasnacht Day
Race for the Presidency

Helvetia is a town in the Forest region of Appalachia. It is currently inhabited by the Scorched.

Settled by German and Swiss immigrants following the Civil War in 1869, Helvetia was a village of professionals and craftsmen, including musicians, cheesemakers, stonemasons, doctors, and teachers.[1][2] With additional immigration from Switzerland and areas of the United States, Helvetia's population rose to 308 by 1875, specializing in crafts, arts, and agriculture.[1][2]

Helvetia maintained its unique Swiss and German-American culture, including art and holidays. Key among these was the Fasnacht Day celebration, burning an effigy of Old Man Winter after a parade known in West Virginia for its colorful and unique masks. The town invested in Protectron robots to reduce the workload associated with the parade, the robots also serving as a popular tourist attraction.[3]

When a Horizon Airlines jet crashed in the valley to the east, a group of the locals journeyed there to assess the situation and look for survivors.[4] Some of the citizens used the wreckage to build habitation, subsequently known as Horizon's Rest.[5] The Cult of the Mothman utilized the local church for a place of worship and Scorched roam the streets.

Helvetia is small and compact, bordered by the mountains on the north and the south, and a river running through the middle. The town was once a tourist destination and features German/Swiss themed buildings to showcase the town's heritage. There is a church, store/post office, bookstore, museum, Cheese Haus, The Honey Haus, Freyja's Haus Restaurant, and a few other unmarked buildings which can all be explored.

The two main roads are Pickens Road, entering Helvetia from the west and terminating in the east, over the river, at the Helvetia-Adolph Road passing through the town on a north-south axis. Helvetia also hosts the seasonal Fasnacht Day. When this event takes place, Helvetia is decorated accordingly and the Master of Ceremonies floats about.

The northern side of the town includes the church in the west, with a chemistry station and a voting station on the first floor, Mothman effigy in place of the altar, and a weapons workbench in the attic. Directly east of it is a small unmarked museum with a sleeping bag and a bookstore slightly to the north. The Cheese Haus and the locked Honey Haus lie in the east. Just by the road are the town hall with a banjo and a piano for those inclined to gain the Well Tuned bonus and the hotel. On the other side of the road is the post office, with a locked safe behind the counter and wooden maintenance and storage shed with a weapons workbench.

The eastern part of Helvetia, just over the river, contains Freyja's Haus Restaurant, the stage where the Fasnacht seasonal event begins, a house, and the school haus to the southeast. The church has been converted into a Mothman shrine. The key to the post office is sitting on an interior desk and can be taken from a broken window.

During Fasnacht, several different masks can be acquired, including a Fasnacht man mask, an owl mask, a jester mask, and a skull mask. Later updates granted access to a larger pool of Fasnacht masks to obtain. The town also has several crafting stations including a cooking station in the Cheese Haus and a water pump next to the building. There is also a chemistry station just inside the entrance and on the top floor of the church. There is a weapons workbench on the upper floor of the church and a second one in a small shack across from the vote-counting station. A third one is behind a building south of the restaurant.

Helvetia is based on the real world town of the same name in Randolph County, West Virginia. Lead artist Nathan Purkeypile visited Helvetia while scouting out West Virginia for the game.[6]

An "immortal" level 1 Scorched can sometimes be found in the shop here. This scorched will, once you are detected, attack you without moving from the upper level, dealing unavoidable, invisible damage. The scorched will also be unkillable, regenerating health, and always retaining a minimum of one health.[verified]

Close up of the blood-stained altar

Close up of an upper portion 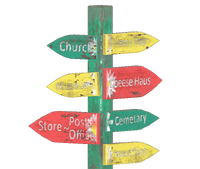