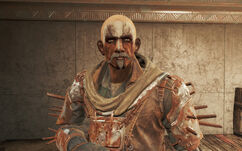 Helter Skelter is a raider in the Commonwealth in 2287.

Helter Skelter is the leader of the raiders established inside Malden Center. During 2287, he and his gang are fighting for control of the center with Institute synths.

Helter Skelter appears only in Fallout 4.

Helter Skelter's name is most likely a reference to a song by The Beatles of the same name. Another possible source could come from 1960s celebrity Cult Leader Charles Manson who often claimed the song was a warning of a race war between Caucasians and African Americans.

Retrieved from "https://fallout.fandom.com/wiki/Helter_Skelter?oldid=3176860"
Community content is available under CC-BY-SA unless otherwise noted.