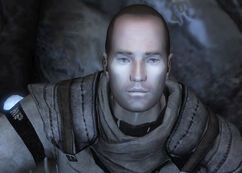 “Oh, thank God! I didn't think I'd ever see another human face down here.”— Private Halford

Help for Halford[1] is an unmarked quest in Fallout: New Vegas.

Upon entry to Camp Guardian the Courier will receive a radio broadcast containing word of Halford's problems. There will be 3-4 radscorpions on the mountain path and several giant rats near the camp itself. After finding Halford's tent, there is a journal piece nearby telling the Courier of the cave behind their tent. In the entrance there is a crate with several C-4 plastic explosives and a 9mm pistol. No lakelurks should be found on the way to Halford.

When Halford is found in the caves, the player character may notice a blood puddle near his leg. Having a doctor's bag or Medicine skill of 50 will allow the Courier to heal his leg. Upon exiting he will give his rifle in full condition and a note with schematics for the dog tag fist and tell the Courier to take the note to his superiors.

Retrieved from "https://fallout.fandom.com/wiki/Help_for_Halford?oldid=2879220"
Community content is available under CC-BY-SA unless otherwise noted.