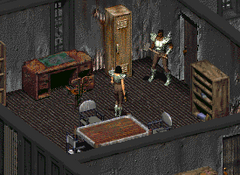 “I've finally paid Tyler back for what he did to my brother.”— Lara

Help Lara attack Tyler's gang is a quest in Fallout 2.

After finding a weakness in Tyler's gang, Lara will refuse to pay the Chosen One unless he joins them in the attack.

The gang at the church consist of five NPCs, one armed with a sledgehammer and four armed with 10mm pistols. Stick around long enough to watch Lara's gang cut down Marc, the doorman. The Chosen One can then talk to Lara to receive the payment.

If the Chosen One steps inside the church during combat or after Marc is dead, he will have to fight the other four guards, as they will go hostile. It is important to not hit any members of Lara's gang!

An alternative to the solution suggested in the quest title does exist. When Lara first gives the Chosen One the quest, telling her about needing to prepare, then quickly shooting over to Tyler and informing him about Lara's cunning plan will make Tyler request for the Chosen One to follow Lara to the church as normal, but turn on her when the battle begins. Doing so will net the same 1000 Experience Points, but -30 Karma.

Bear in mind that if the door was being closed prior to accepting the quest it will become locked when the assault happens. This gives the benefit of the guards being locked inside and therefore not being able to immediately come out and fight. The drawback is that it would require lockpicking or destroying the door to complete the quest, as it will not be finished until all of Tyler's men are dead.

Retrieved from "https://fallout.fandom.com/wiki/Help_Lara_attack_Tyler%27s_gang?oldid=3340907"
Community content is available under CC-BY-SA unless otherwise noted.