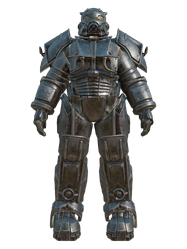 Note that this is an unobtainable variant. See the gallery for the rank 100 reward.

Hellfire prototype is a type of power armor skin in the Fallout 76 add-on Nuclear Winter.

A fire-resistant power armor prototype developed by the Enclave after the Great War. In October of 2080, a suit of this armor was sent to Vault 51 from the Whitespring bunker, after ZAX 1.3c impersonated Dr. Stanislaus Braun.[1]

While considered a separate model of power armor, the Hellfire prototype in Nuclear Winter is a cosmetic item for the player's power armor. It completely changes the appearance of the power armor it is applied to.

The skin is automatically unlocked after reaching rank 100 in the Nuclear Winter gamemode. The armor is cosmetic only.

A sneak peak from the Nuclear Winter reveal trailer

The only variant obtainable in game, unlocked at rank 100

A cut variant, unobtainable in game

A cut variant, unobtainable in game
Add an image to this gallery

Retrieved from "https://fallout.fandom.com/wiki/Hellfire_prototype?oldid=3138133"
Community content is available under CC-BY-SA unless otherwise noted.