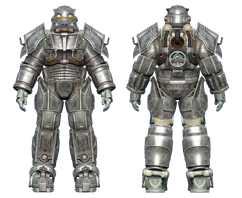 “Big, beautiful and utterly terrifying, the ultra-protective Hellfire Power Armor is the perfect way to bring the fight to the enemy... and end it quickly.”— Store description

This section is transcluded from Enclave power armor. To change it, please edit the transcluded page.

This armor is the result of a post-War research and development project undertaken by the Enclave. An early iteration was completed by October 2080, and was shipped to Vault 51 at the behest of the vault's ZAX computer[1] while the final mass-produced version would see large scale deployment in 2278. Initially, the mass-produced armor was one of several concurrently active research projects taking place at the Adams Air Force Base, including one on eyebots and a material called Duraframe, but ultimately came to be the most in-demand project fully completed; other projects, much to the chagrin of researchers such as Whitley, were canceled in favor of the new model of power armor by Colonel Augustus Autumn.[2]

As state-of-the-art power armor, it is conclusively the best and most advanced model of power armor there is. It provides its wearers with more protection than any other form of armor produced post-War, due to its unique Duraframe components and high resistance to heat.

The suit is identical in terms of Damage Resistance to the earlier X-01 power armor. Unlike its Capital Wasteland counterpart, the internal power source necessitates the use of fusion cores.

Obtained from Pyro, a member of the Forged raider gang, near Listening Post Bravo during the quest Pyromaniac.

The power armor pieces found on the suit are leveled. 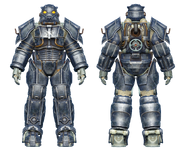 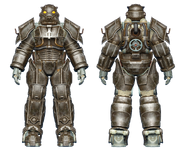 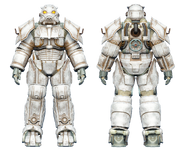 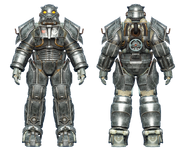 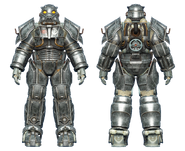 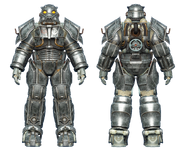 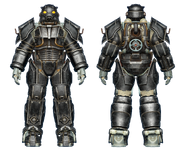 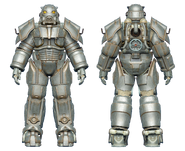 Jet pack from the front

Jet pack from the rear
Add a photo to this gallery

Retrieved from "https://fallout.fandom.com/wiki/Hellfire_power_armor?oldid=3417484"
Community content is available under CC-BY-SA unless otherwise noted.