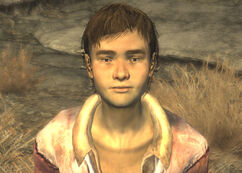 “I deliver things and stuff for the people here. They give me caps to do it.”

Unassuming and ignored by adults, Hector is nevertheless one of the crucial members of the Westside Co-op. When Tom Anderson and Clayton Ettienne were talking about Anderson's idea to divert water from the local cistern and use it on the crops but were trying to work out a plan on how not to cause suspicion from the NCR. Hector overheard them talking about this and volunteered himself since no one pays attention to him or his brahmin and he already makes a living by delivering stuff around for the people of Westside.[2]

With Hector and his brahmin delivering water to irrigate the crops of the co-op, the crops flourished. This allowed them to produce food for use and export. Eventually, Hector was caught in the act by Corporal White and forced to rat Anderson out, but, as far as Hector knows, the situation was resolved. He has a feeling it wasn't in a good way, though.[3]

The White Wash: Hector tells the Courier what is really happening to the water if they fail the Intelligence check with Anderson.

Hector shares the same dialogue lines as other Westside residents, which can end up with him humorously stating "That Sweetie sure is something."

Retrieved from "https://fallout.fandom.com/wiki/Hector?oldid=3188373"
Community content is available under CC-BY-SA unless otherwise noted.