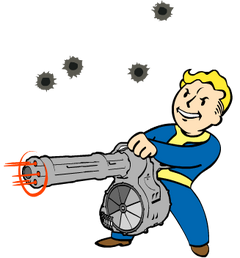 Heavy Gunner is a Strength-based perk in Fallout 4 and Fallout 76.

“Thanks to practise and conditioning, you're able to utilize the weightiest of weapons with an extra degree of precision. Check the Weapons chapter for the different types of heavy guns so you know which ones this perk affects. Combine with other weapon perks so you receive a bonus no matter which weapon you wield.”— Fallout 4 Vault Dweller's Survival Guide description

For explosive heavy weapons, Heavy Gunner also increases explosives damage. This stacks with the Demolition Expert perk and taking both to their highest rank will result in 4 times damage (2 x 2).

This perk modifies the following weapons, as well as their unique variants:

Retrieved from "https://fallout.fandom.com/wiki/Heavy_Gunner?oldid=3445704"
Community content is available under CC-BY-SA unless otherwise noted.