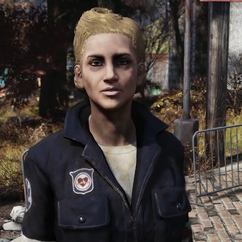 Heather Ellis is a resident of Flatwoods in Appalachia in 2103.

Heather traveled to Appalachia with Paige and the rest of the original settlers of Foundation. After some time, she decided to go out on her own and explore, although the trip from Foundation to Flatwoods was incredibly dangerous,[1] hoping to discover something about herself in the process. Although the Responders were wiped out by the Scorched prior to 2103, Heather discovered their story when she arrived in Flatwoods after following the Responders' radio broadcast. Admiring their purpose, she decided to stay in Flatwoods to see what else she could learn.[2]

Although the Responders were killed during the Scorched attack of Morgantown Airport, Ellis considers the group to have been very noble and brave for not running away, instead heroically sacrificing themselves to save others and help them survive in order to do what was right.[3][4] She also wears a Responder outfit she found in a nearby house, out of sentimental and admirable values for what the Responders were and stood for, hoping to one day see a new generation of Responders.[5]

As of 2103, she lives near the Flatwoods Church with her dog, Chloe. During this time, she has met several Vault 76 dwellers,[6] and become familiar with nearby areas of interest.[7]

She can be asked multiple questions about Flatwoods and her past. She also notes that coming to Flatwoods from Foundation was difficult and advises the player character not to go up there until they are properly equipped.

Heather Ellis appears only in Fallout 76, introduced in the Wastelanders update.

Retrieved from "https://fallout.fandom.com/wiki/Heather_Ellis?oldid=3371683"
Community content is available under CC-BY-SA unless otherwise noted.