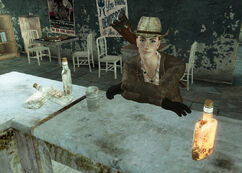 “They want to buy Cassidy Caravans? Don't they know it's burned to ash?”— Cass

Heartache by the Number is a companion quest in Fallout: New Vegas.

Upon first interaction with Cass, she will direct the Courier to the Crimson Caravan Company for work. Once there, Alice McLafferty, the company's manager, will assign a series of jobs. One of these jobs will involve buying off Cass's caravan, Cassidy Caravans. There are several methods of convincing her to give up her caravan:

The Mystery of the Caravans[edit | edit source]

After Cass is persuaded, she can be recruited as a companion. If one has Evil Karma, she will not initiate the quest and will instead yell or even leave the party.

After talking to her (via the companion wheel) with sufficient Karma for her not to be annoyed, she will want to visit her caravan's wreckage site to pay her respects. Cass's caravan wreckage will have nothing left but a dead pack brahmin and some miscellaneous loot. Upon further examination, Cass will notice something suspicious and suggests visiting Griffin Wares' caravan.

The second caravan, which is found nearby a billboard south-west of the Horowitz farmstead has suffered the same fate as her caravan. Aside from the three dead pack brahmins and various scattered loot, there are three ash piles. Cass will become even more suspicious, and will want to examine Durable Dunn's caravan.

Durable Dunn's caravan, aside from the similar damage the earlier caravans sustained, has the corpses of a Van Graff thug and a Crimson Caravan guard. The picture will be clear to Cass; the Crimson Caravan Company and Silver Rush are colluding to eliminate competition for the caravan business. She wishes to kill Alice McLafferty, the Crimson Caravan manager, and Gloria Van Graff, the head merchant of the Silver Rush, for all of the damage they caused. One can intervene in Cass's rash decisions and offer a more peaceful solution, or agree and aid her in killing both of them. Attention: If this is done after the player has started Birds of a Feather with the Silver Rush faction, be aware there is a Silver Rush member near by. Killing him will cause the Silver Rush faction to be hostile towards the player upon returning to Freeside. When Simon begins to attack the player, the Birds of a Feather quest is failed.

To come up with a more peaceful solution, one must gather evidence of the two caravans' true motives. These pieces of evidence are located in the two following locations: a safe in the Crimson Caravan main office and a safe behind a locked room in the Silver Rush. If one agreed to help Cass "settle accounts" with Alice McLafferty and Van Graffs, there won't be any evidence in the safes if changing one's mind.

The evidence required to prove Crimson Caravan's reasons for attacking is located in a safe in the main office, next to Alice McLafferty's desk. It can be unlocked in two possible ways, with a loss of karma:

Once the incriminating note has been obtained, talk to Cass and show her the evidence.

The evidence required to prove the Van Graffs' true motives is located in a safe behind a locked door inside the store. There are two ways to open the door:

The safe can also be opened in two ways:

Once the two pieces of evidence have been obtained, Cass will suggest taking it to Ranger Jackson. The evidence will be passed on to NCR higher-ups, determining the fate of the two companies.

The quest will end once one talks to Cass. Cass will receive the Calm Heart perk, which grants her an additional 50 HP. One will also receive 500 Experience Points.

One can aid Cass's initial plan by helping her kill Alice McLafferty and Gloria Van Graff, by any means necessary. So long as both of the managers are dead, Cass will have fulfilled her vengeance.

Once both targets are dead, speak to Cass to conclude the quest. Cass will earn the Hand of Vengeance perk, which gives her an additional 15% damage with guns. One will also receive 500 experience points.

This is one of many quests that are named after songs that can be heard on the radio, in this case the Guy Mitchell song Heartaches by the Number, which is broadcasted in-game on Radio New Vegas and Mojave Music Radio.

Retrieved from "https://fallout.fandom.com/wiki/Heartache_by_the_Number?oldid=3422124"
Community content is available under CC-BY-SA unless otherwise noted.
... more about "Heartache by the Number"
RDF feed
Has platform
PC +, Xbox 360 +  and Playstation 3 +