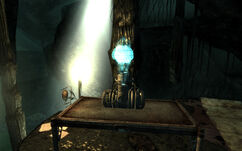 “Would that I was so wise! No, true leadership of the tribe belongs to the higher mind of the enlightened one! Although his mind has moved beyond the need for flesh, his consciousness still returns here to guide our people. I merely interpret his wishes.”— Jackson

Hearing Voices is a Fallout 3 quest that is added to the game with the Point Lookout add-on.

After gaining entry to the Ark & Dove cathedral, locate Nadine and speak with her to learn that she has apparently joined the tribals in order to procure their punga, in failing to achieve her original goal of discovering treasure in Point Lookout. Questioning her will reveal that the tribal leader Jackson is hiding out at his sacred praying grounds accessible via the sea cave and she will hand over the key for it. Upon further conversation with Nadine, she will remove the player character's scar and ask that she be met at the pier later, stating she has a hunch as to who removed a portion of your brain.

After speaking with Nadine and getting the key to unlock Jackson's sacred praying grounds, return to Desmond and tell him the news. Of course, Desmond chastises the player character for not interrogating the Tribal's leader first. Leave the mansion for the Wrecked Seatub and enter the caverns that hold the leader of the tribals as well as his means of communication with Calvert.

To find Jackson, follow the torches to his inner sanctum. There are mirelurks in the cave that will have to be dealt with or sneaked past. Two well stocked and submerged safes are along the path as well, one in the first room to the left of the boat, the other in a long narrow pool to the left of the walkway further into the cave. Between the two areas containing the safes is a deep pool with an underwater passage to another small room with 20-30 pre-War money scattered about and in a level based locked trunk.

Upon entering the final room, Jackson can be seen kneeling before a table speaking to what appears to be a holographic talking brain. Let Jackson and the Brain finish, then speak with the Brain. It does not reveal who it might be straight away but explains that it is using the local tribal cult as means to destroy a signal jamming device that Desmond is using to restrict the Brain's broadcasting signal. The Brain is rather disappointed that the tribals take its instructions to mean destroying the mansion itself instead of the jamming device.

Shooting Jackson in the back while he's still conversing with the Brain causes it to react with surprise, then with satisfaction at your to-the-point method of doing things.

In any event, the Brain will tell the player character to locate Desmond's jamming device, and find a way to destroy it, so the Brain can expand the range of its psychic influence beyond the sea cave. This starts the Thought Control quest.

Report back to Desmond in the Calvert Mansion with the information you obtained from Jackson and the Brain while in the cave.

Retrieved from "https://fallout.fandom.com/wiki/Hearing_Voices?oldid=3337231"
Community content is available under CC-BY-SA unless otherwise noted.