Healing archways are found throughout Mothership Zeta, as part of the ship's internal architecture. They instantly heal the Lone Wanderer up to about 75% of their maximum health and remove all radiation when walking through them, whereupon a message saying "the archway has restored some of your health" appears on the screen, but the radiation removal is not notified.

After the player character has passed through it, the archways need to recharge for 15 seconds. If one attempts to use the archway before this time has elapsed, the following message will appear: "The archway is recharging and not ready for use."

Player characters with a Science skill of 75 or above can modify the archway so it fully heals them. However, after doing this the archway will burn out after three uses, rendering it useless whereupon the following message will be shown: "The archway has burned out and is no longer useful." After modification, one can check how many uses are left by activating the modified archway.

Sometimes the healing archways will not work. Activating them seems to do nothing. Restarting the system seems to fix this in some cases. This can also apply to individual arches, meaning that some arches will work, while others won't do anything at all. Modifying the device will usually fix this. [verified] 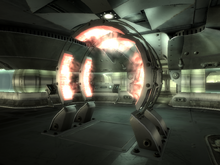