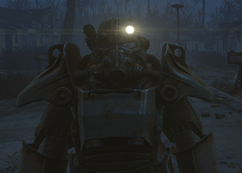 Headlamps are lighting devices introduced in Fallout 4. Headlamps are used to complement the Pip-Boy's ultra-bright light, which illuminates the area surrounding the Sole Survivor.

The headlamp is most commonly used after entering a suit of power armor and is activated with the same hotkey. However, instead of a light that surrounds the player, it resembles a spotlight similar to those used by submersibles. The T-45, T-51 and T-60 models all have the light mounted on the head, while the X-01 model has the light coming out of the eyes.

Headlamps are also mounted on mining helmets. However, the lamp on the combat armor helmet is aesthetic, and cannot be activated.

Similar to the default headlamp, but nearly twice as bright.

A red light headlamp that is not visible for ghouls and animals.

A headlamp with an image of the Vault Boy in the center.

The Vault Boy headlamp modification when turned on

The bright headlamp of a T-60d power armor
Add an image to this gallery
Retrieved from "https://fallout.fandom.com/wiki/Headlamp_(Fallout_4)?oldid=3128909"
Community content is available under CC-BY-SA unless otherwise noted.