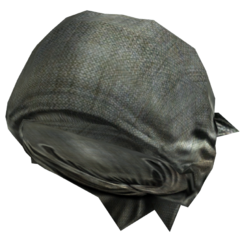 Head wrap is a piece of headwear found in Fallout 3.

The headwrap has a weight and value of 0 as well as a Damage Resistance of 1. They can only be repaired with other head wraps. Unlike most clothing, they cannot be repaired by merchants because they have no value. However, this is negligible, since its condition does not affect its damage resistance (because it is already at the minimum).

Brock, Laszlo Radford and Wild Bill (The Pitt add-on) sport the gray variant. This is also worn by the wastelander in the random encounter 'More Than Just Scrap'. This wastelander respawns every 73 in-game hours, and can be killed repeatedly for their gray head wrap, with no negative consequences.

The dark gray head wrap is worn by Alejandra Torres, Belle Bonny and Mei Wong. It is also found on a shelf near the pitching machine inside Herzog Mine in Point Lookout.

The yellow/red variation is included in the game files of Fallout 3, but is not used in the base game. Midea in the add-on The Pitt wears it. It can not be repaired by merchants; but only by other head wraps. 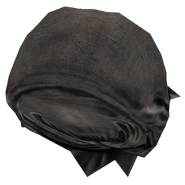 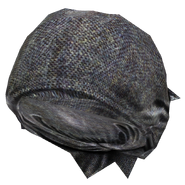 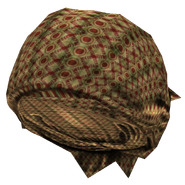