The hazmat suit is an armor set in Fallout 76. 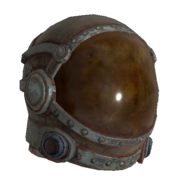